First off, I'm gonna tell you all that Double Dead is not for the faint of heart. If you suffer from a severely overactive gag reflex, heart murmurs, are a nun, or you're just straight up noodle-necked (not a real thing), stay well back. If you don't fall into those categories, pick up the dang book. I give Double Dead 5 solid stars, and it deserves it.

Alright, I know March's Writer Interview is really late, but I have a good reason, I promise! Just give me a moment to explain! Last year I had the opportunity to meet Bryce Moore at Conduit 2011 (where I also met Peter Orullian, another author interviewee of mine who you can read up on here). We chatted a bit about his book Vodnik, which (I believe) he had contracted recently. A year later, it's finally coming out! Last month I contacted Bryce about doing an interview to help publicize Vodnik to some of my readers, and he agreed, 'cause he's a cool guy like that. He provided me with the ARC (Advanced Reader's Copy) so I could familiarize myself with it, which I did enthusiastically. You can read my review here. We decided to hold off on releasing the interview itself until Vodnik was closer to being available, in order to help with the initial sales effort. You all know how important the first few weeks of a book's release are, right? Right? 'Cause a book's first month is huge in determining the continued support of marketing dollars, and plays a large roll in how many retailers want to stock it.

Anyway, Vodnik is great; probably my favorite book of this last year. It's different than most others I've read, and totally refreshing. But I'll let you read my full review yourselves. Make sure to check out the link Bryce provided at the bottom of the interview, where you can purchase the Kindle version right now (in case you didn't know, most smartphones, definitely the iPhone, have Kindle apps. FYI). The hardcover of Vodnik will be officially released on March 28th. So pick it up; it's totally worth it.

A review of Bryce Moore's VODNIK. In short? Excellent.

Every once in a while, I read a book that ends up being the equivalent to a tall, icy glass of water. Or better yet, Sprite. Just refreshing. I can think of several in my own reading experience (just to name a few): Harry Potter, Fablehaven, and most recently, Vodnik by Bryce Moore. Now don't mistake me, I'm not comparing these books to each other, or even grouping them up under some category, I'm simply saying they all gave me the same sense of excitement; the feeling that I was reading something new. With Harry Potter I was blown away in part because it was one of the first true Urban Fantasies I had read (not to mention a million other things, love that series). Fablehaven was bursting with simple imagination and adventure, something I really needed at the time I read it. Vodnik smacked me in my face and showed me that true wit, sarcasm, earnest story-telling, multi-layered plotting, grit, and fairy tales can all inhabit the same book.

Partial review of THE MUPPETS, focused on one specific area.

My World's Map. By Your's Truly.

I made this after attending a panel on mapmaking by Isaac Stewart at LTUE. Thought it might be fun to post. If you haven't realized, it's also my background. 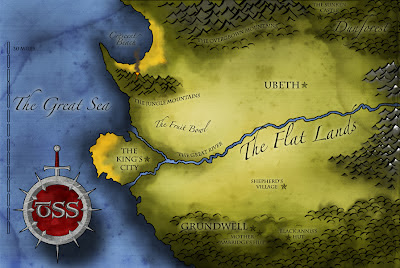 DISCLAIMER: I am not half as depressed as this makes me sound. Just keep that in mind.

I've been thinking lately about how I compare to other writers out there. I can't help but feel like I'm somehow different, broken, wrong. I always hear authors talk about how they doubted themselves back when they were writing their first five novels, but learned to get past it for the manuscript's sake. Kinda like a paralyzed dude triumphantly standing up from his wheelchair at the end of an inspirational movie. But then they leave it at that.

Well, I'm sorry to say, I'm not satisfied with that. I feel like I need to know more. I need to know if their pain (wow that's dramatic) is anything like mine, if their doubt is as soul-consuming. Do they struggle to understand their own writing's worth, like me? I'd like to someday see one of the authors I respect write about their issues, to really see if I'm so different and destined for failure.

Who knows if I'll ever get that wish. I guess they have a reputation to maintain, and such things would hurt it. Well, I don't have a reputation, so for what it's worth, here's my little list of things that I struggle with. If anything resonates with you, or you feel the same way, let me know, please.

I have no idea if I can write worth a crap.

When I write, the sentences often make me cringe.

I often hate my own imagination.

There are times when I look back at my day's writing, and feel a pit form in my stomach; I know I'll have to throw it all away.

I don't know who my characters are. I just hope to god someone else will. We talk all the time about building a strong personality with flaws and quirks, but at the end of the day, it means nothing to my brain.

As far as my own plot goes, it's all over my head, no matter how much I outline. I fly by the seat of my pants, praying I'll end up somewhere safe.

The concept of pacing completely eludes me.

I have no idea if my book is even the slightest bit original.

I don't know if my potential readers will get even the smallest bit of excitement from my action scenes.

When I try to write emotions, I feel they come off as corny and contrived.

When I post about writing, I feel like everyone is laughing at me. "Look at that idiot, he thinks he's an author!"

I don't know a damn about making people laugh.

I will never be a part of the "published author" community.

I don't have what it takes to get an agent or editor to like my books.

No one will ever want to read what I write.

Only spambots visit my blog.

When I look at all the people around me selling books, I know I'll never be as good as them. There are thousands of people writing, right now. I have no chance.

Everyone will lie to me when they read my book, tell me it's good. They most likely never read all the way through it.

I often feel like my family, of all people, care less than the strangers.

It's easy to end this by telling all of you to not let these things get you down. To keep going, and all that. I wish I could tell myself the same, and believe it. I won't stop writing any time soon, but I shudder to think that it will always be this way. Am I ready for a life of uncertainty?

Sprucing up a character.

I'm doing this right now. Hopefully some of my ramblings will make sense, possibly even be helpful if you're having the same problems as me. As most of you know, I'm in the middle of a second version of my book The Sometimes Sword. One of the main things I wanted to do this time around was inject more personality into everyone. I feel like so far I've been doing well. Most every aspect is a hundred times better than the first version: plot, descriptions, character voice, action, creepiness, etc. I can do even better though. I'm about halfway through with 61k words complete, but before I go any further, I want to go through and spruce up my main character Astrid.

She's always been the weak link. I've always been so focused on making her likable and relate-able. As I've been reading other books lately, I've been struck by how directly related character personality is linked to their foibles. They walk hand in hand. Therefore, it stands to reason that if Astrid lacks the proper amount of flaws, she also lacks an equal amount of personality. So I'm taking her back to the drawing board, re-evaluating her, and adding in some crap. We'll see how it goes.
Posted by Trevor Green 1 comment: Links to this post
Email ThisBlogThis!Share to TwitterShare to FacebookShare to Pinterest
tags: authors, books, character development, Character flaws, Character Sheets, characters, fantasy, novels, writers, Writing
Newer Posts Older Posts Home
Subscribe to: Posts (Atom)