My Halloween mood is starting up early this year. 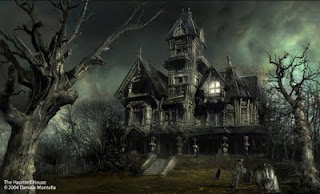 Every year I get an itch between my shoulder blades, usually around the first of October or so. Halloween is coming soon by that point, and my brain gets filled with thoughts of pumpkins and little plastic witches hung from doorways. Its like Christmas for me.

Don't get me wrong, I love Christmas like no other, but Halloween just has this... feeling to it. It's a million things rolled into one: the sharp scent of fall in the air, the sound of red and yellow leaves skittering across the sidewalk, the haze of cinnamon and nutmeg streaming from cookies and bread. Ok, most of that is just Fall stuff, but it's also the smell of old latex and fake blood, not to mention the musty smell of fog machines. Every where you go you can hear the cheesily recorded wails of plastic ghosts and ghouls, or see the flashing red lights of a novelty skull's eyes. Haunted houses, black and orange decorations, and Halloween costumes carry their own distinctive smells and sights, all of which combine to form the feelings I get at Halloween time.

But its more than that, isn't it? Halloween isn't just a plasticized holiday, its a deep-seated celebration of everything dark that we as humans have been afraid of for ages. This is the real reason I love Halloween. It's a chance for our society to put aside our irrational fears (unfounded fears, I might add) of the macabre, and revel for a short time in horror.

There is something fascinating in the grin of a bleached skull, or the pallid gaze of a zombie. We know in our brains that humans should look and act a certain way, and when they don't, it twists our minds up, and gives us chills. Seeing our own faces echoed in shadow is thrilling, and emphasizes who and what we really are (just like Christmas hopefully mirrors the best of us).

I've always had a tendency to dwell on dark subjects (not in a morbid sense), and the cliche atmosphere set out in stories like The Legend of Sleepy Hollow. Mist-covered paths through a dense, dark forest, with unknown sounds following you is one of my favorite settings. Which brings me to the point of this post. We aren't half way through September yet, but I'm already beginning to day dream about creepy houses and bumps in the night. An idea struck me about a short story I want to write yesterday, and I'm excited to get going. It will be set in the same world as The Sometimes Sword (my current novel, for those of you that remember) with one of the same characters. The tone will be darker, as I will be going for genuine horror. I won't be going for anything original. (I generally don't. I'm a big fan of the familiar tropes.) Besides, there are so many out-of-the-box horrors out there, and everyone is probably better than I could manage. I hope it will turn out well, and if it doesn't, it will have at least been fun to write.

I hope to have it completed by the next week or so. I might even post it here, depending on the results. So keep an eye out. If you feel so inclined, write one of your own, a short horror story with a classic Halloween mood, about anything. Post it wherever you like, or if you want to, I can post it here. Email me with your story at myhamstring@gmail.com.
Posted by Trevor Green
Email ThisBlogThis!Share to TwitterShare to FacebookShare to Pinterest
tags: amateur, author, authors, books, creepy, dark, fantasy, fun, genres, Halloween, horror, story, terror, writers, Writing