Saladin Ahmed's first published novel just came out on February 7th of this year, and I have to say that I was very excited for it. Saladin had been featured on the Writing Excuses podcast sometime last year, so I was somewhat familiar with what he hoped to accomplish with this book, and have been following him on Twitter ever since. Quite some time later, I heard that the novel was finally close to coming out, and began looking into it further. I read several pre-release reviews and a synopsis, and found myself eager to dive in. I even somehow managed to mistake the release date for the last day of January, and found myself disappointed once I rushed over to the Apple Bookstore. After waiting a whole week, I was finally able to purchase and download the ebook. Here's what I thought: 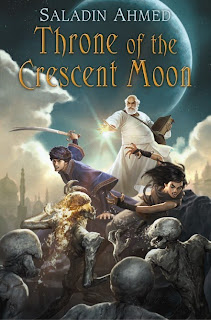 This is the sort of book that stands out from a crowd. When you first see the cover, it strikes you with the back of it's hand and tells you to pay attention. The image is thick with color and the clean lines of a comic book, its subjects captured in an explosion of motion, Marvel Comics style. Unconventional clothing and weapon styles instantly tell you that this is no European-style fantasy, something that really excited me. Don't get me wrong, I love the traditional sword and sorcery stuff that's been coming out for decades, but just like eating too much ice-cream, it can sometimes leave you feeling unsatisfied.

Saladin's book smacks of many different cultures, from Egyptian to the classical Arabic turban-and-camel-riding nomadic tribes we see in movies. I'm no expert, and I probably just offended someone there, but Saladin pulls everything together in a truly unique world that I've never seen in Fantasy. He doesn't just dress the traditional S&S in a turban and hand it a scimitar, he works his way up from a solid foundation of unique culture, infusing every aspect of the book with the traditions of his world. The food they eat, the tea they drink, even their curse words and oaths are steeped in their culture. The characters themselves have their very personalities and self-identities shaped by the specific views on religion and family present in this blend of pseudo-Arabic cultures (once again, if I'm using the wrong terms, please forgive me). Also, I want to use the word "culture" one more time. Culture.

Beyond the unusual setting, Saladin brings some other great aspects into play. Unlike many books of the same genre, Throne's main protagonist is a 60 year-old man named Adoulla, a ghul hunter who just wants to retire and get married. (The point of view is shared by several people over the course of the book.) It's pretty amusing to be inside this semi-crusty old man's head as he watches youth wasted on the young, even forgetting the author himself isn't exactly what you would call old. If I had my way, more time would be spent on The Doctor's point of view, he's really a great character.

The story is easily followed, with plot points popping out to say "hi", not trying particularly hard to stay hidden. In my mind, this was a good thing. Most of the events take place in a huge, shining city, forgoing the normal hero-on-a-quest format. The action is short and to the point, with a few gruesome bits thrown in for good measure, which I like. The book features some pretty cool magic, and a seriously bad-ass bad guy. Creepy stuff.

Finally, I have two complaints about this book, and they are small:

First off, it's short. For an adult fantasy novel, it tops out at an unusual 288 pages, leaving me wanting more. Before you get all up in arms, let me clarify: I don't believe that every fantasy needs to be a 240k word behemoth, nor do I think Saladin was lacking in proper story-telling technique. Everything wraps up satisfactorily, and his descriptions are more than adequate. The experience was simply over too soon. I wanted to keep reading, because this unique world and characters felt like they had more to give me. Hopefully there are more books to come.

Next, and this is my only major issue, I felt like two of the younger characters were underdeveloped, not individually, but in relation to each other. SPOILER ALERT! I think it comes as no surprise that there is a "B" story in this book, centered around the budding romance (if it can be called that) between a young zealot and a teenage tribeswoman. By the end of the book, the word "love" is used, and I honestly didn't see the proper build up to it. It almost seemed like they fell in love because they were supposed to. Did it ruin the story? No. Is it the reason I gave the book four stars instead of five? Yes. Combined with the fact that I only give five stars to books that totally blow my mind away (which is hard to do). That being said, four stars is stellar, and I highly, highly recommend this book to anyone looking for a good fantasy adventure. Go buy it here!