1998 Emperor Palpatine from Return of the Jedi by Kenner.

This 12" Emperor Palpatine figure comes straight from Return of the Jedi, the last of the Star Wars movies (so far). In the movies, he's the ruler of the Galactic Empire, a dictator with a hatred for all non-humans, the dark center of the galaxy, and the acting force behind Darth Vader's many atrocities. Luke Skywalker's character arc peaks during his confrontation with Emperor Palpatine and Darth Vader, where the Emperor's cruel order to join the Dark Side or watch his friends die brings an emotional and powerful climax to the trilogy. (I'm not sure anyone was expecting freaking lightning to shoot from his fingers!) Vader kind of messes the Emperor's plan up by betraying his master and helping his son defeat the darkness whirling within him, but it was a good plan for a while. Paplatine dies screaming, thrown down an air shaft, where his Dark Side energy explodes and nearly drags a wounded Vader down with him.

This is one of the new figures I've purchased in the last month. And by "new," I mean new to me. He's actually fifteen years old, but came to me sealed and pristine in his original packaging. I originally purchased him in tandem with a new figure of Luke (more on him to come), but fell in love with him as soon as I opened the box. The detail on his face and hands is exquisite, by far the best sculpt job of any of the 12" figures I own so far. Everyone I've shown him to gives me the same reaction: "Oh, he's creepy!" I love it. His robes are well made and the falls of fabric actually look like the costume from the movie. The only downsides I can see are his resistance to standing up straight (which the figure stands I purchased will rectify as soon as they get here) and a strange decision by the manufacturer to sew his hood to the top of his head. It makes his head seem kind of flat and smashed on top, so I stuffed some tissues under the hood to give it some extra volume. I'm pretty sure I'm going to keep collecting more Palpatine stuff, he's just that cool.

I don't know if I've ever come across a character that does the "evil overlord" archetype better (Sauron from Lord of the Rings certainly comes to mind, but I'm not sure who wins out). Palpatine is evil as all get out, unseen in the original trilogy until the final movie, which was an excellent move: letting the obvious intimidation of Vader run the show for so long, until–BAM!–someone even more evil shows up. I'll never forget the first time I saw his shuttle fly into the Deathstar, surrounded by ranks of white stormtroopers and greeted by a nervous–nervous!–Darth Vader: the low male's chorus in the background (love his theme), the bleak atmosphere, the slow reveal of the character from the hem of his plain black robes up, not to mention that damn creepy cackle he weirds Vader out with a minute later as they talk. Oh man, such a great character. I actually used his general appearance and creep factor to inspire one of the characters from one of my novels. 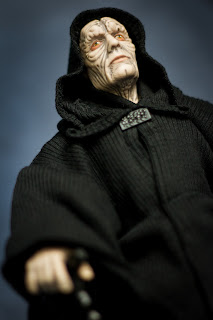 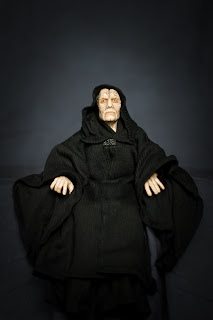 If the video below doesn't show up on your smartphone, use a desktop. Not sure why that is.