This 12" Han Solo figure is the quintessential smuggler as we know him from Episode 4: A New Hope. It's the clothing every kid wanted to dress up in, and every girl swooned over. (Those tight pants and low-slung belt? Yeah, sexy). Something about the outfit fits perfectly with Han's swagger when he boasts that the Millennium Falcon was the one "who made the Kessel Run in less than twelve parsecs" to a skeptical Obi-wan and confused Luke. (Most likely because parsecs are a unit of distance, not speed. However, this isn't actually a mistake on Han's or the scriptwriters' part, seeing as the Kessel Run is a well-traveled smuggler's path that runs through an asteroid field edged by a cluster of black holes. The closer one pilots their ship to the black holes to avoid losing time dodging among the asteroids, the more space and time are warped, thereby shaving distance from the route. This makes Han's boast not only correct, but an impressively dangerous accomplishment.)

This Han figure technically belongs to my oldest brother, though it resides at my house for now. (I'll be getting my own duplicate as soon as I can.) I love the detail of his jacket and the way his belt sits with the grip of his blaster right next to his hand. Notice the Corellian Bloodstripe running down those trousers, an award for bravery, I believe. He's the only dude who can actually pull off a popped collar. While his face isn't the truest representation of Harrison Ford's (even the 6" Kenner figures from 1995 do a better portrayal), I consider it a fun interpretation of the character, rather than an attempt at a real-life face.

Han runs a close second to Luke as far as favorite characters go, and I've always liked the Star Wars novels featuring Han prominently best. His cocky attitude and dangerous scowl are the perfect foil to Luke's earnestness in A New Hope. His relationship with Chewie has always fired my imagination; just two buddies out adventuring in the galaxy and running from those up-tight Imps. While Harrison Ford has long held that he didn't think the character had enough depth, I've always disagreed; Han may not be a true anti-hero, but he has that same spirit, the guy who sometimes does the right thing, but is never far from trouble. After all, Han did shoot first. 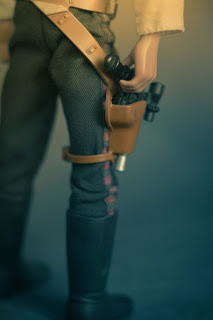 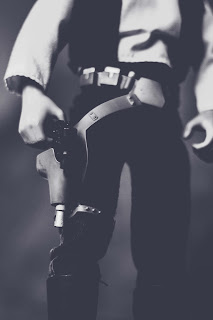